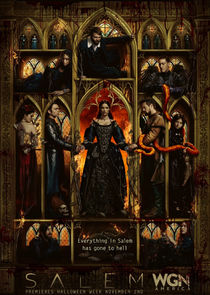 3 seasons No reviews yet

Drama   Thriller   Supernatural
All episodes have aired. Show has ended.

Set in 17th century colonial Massachusetts—a significant time in the history of American politics, religion and society— Salem brings you the real story behind the infamous witch trials. In Salem, witches are real, and they're behind it all. Salem Village and Salem Town feuded over property, grazing rights and church rights. The government was dominated by Puritan leaders. People were scrutinized closely and this resulted in obvious discord. They were afraid of being persecuted for anything that may offend the Puritan mindset. The word "witch" seemed an easy and appropriate curse hurled at someone who behaved abnormally.
Sign in to add to your Watchlist


The Heart Is a Devil


The Witch Is Back


The Man Who Was Thursday