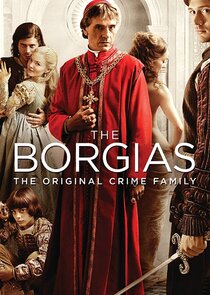 3 seasons No reviews yet

Drama   Romance   History
All episodes have aired. Show has ended.

This expansive drama series stars Oscar winner Jeremy Irons in his Golden Globe-nominated role as Pope Alexander VI, the cunning, manipulative patriarch of the infamous Borgia dynasty, who builds an empire by bribing, buying and muscling his way into the papacy.
Sign in to add to your Watchlist

Shop Amazon for The Borgias


The Face of Death


The Banquet of Chestnuts


The Wolf and the Lamb