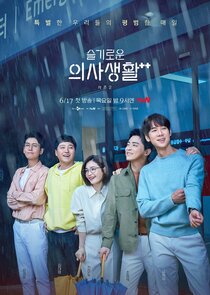 In Hospital Playlist we follow the lives of five ordinary doctors who all attended the same medical school in 1999 are now friends and work together at the same hospital.
Sign in to add to your Watchlist

Call the Midwife
One user recommends

swoo wrote "Only about 1950's era obstetrics as practiced by UK midwives with 50's soundtrack instead of surgeons in modern South Korean hospital but similar tone, plots and subject matter."

swoo wrote "same writer, not in hospital but period drama about neighborhood friends"

8/10 - swoo
In spite of some folks dying and getting super sick, this is a feel good drama/comedy. This relies on a lot of nostalgia through k-pop and k-drama references that mostly sail over my head (I learn about this from the recaps) but I still appreciate the rest of the show. There's no overarching story but the lives of the characters (there's a lot) advance a little bit each episode.
review updated: July 17, 2020

'Hospital Playlist' Netflix Review: Stream It Or Skip It?