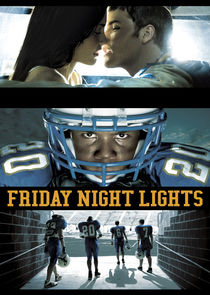 5 seasons No reviews yet

Drama   Sports
All episodes have aired. Show has ended.

In the town of Dillon, Texas, football is life, and no one knows that better than new head Coach Eric Taylor. Pressure mounts as the Dillon Panthers led by star quarterback Jason Street, enter pre-season surrounded by a swirl of press, recruiters and State Championship sized expectations. Backup quarterback Matt Saracen prepares to ride the bench in the shadow of Jason Street, as running back Tim Riggins struggles with a serious vice. As the season opener grows near, the town of Dillon is focused on what they believe to be most important, winning.
Sign in to add to your Watchlist


On the Outside Looking In


The Right Hand of the Father