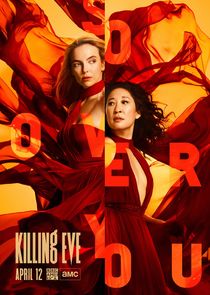 Based on the novellas by Luke Jennings, Killing Eve centers on two women; Eve is a bored, whip-smart, pay-grade security services operative whose desk-bound job doesn't fulfill her fantasies of being a spy. Villanelle is an elegant, talented killer who clings to the luxuries her violent job affords her. Killing Eve topples the typical spy-action thriller as these two fiercely intelligent women, equally obsessed with each other, go head to head in an epic game of cat and mouse.
Sign in to add to your Watchlist


Are You from Pinner?


Are You Leading or Am I?

swoo wrote "Not that similar but if you can stomach a show about an assassin, here's another one."

swoo wrote "instead of woman into high fashion and beautiful things in Europe, working class contract killer in Australia"

7/10 - swoo
The entire show is in the title and it isn't at the same time. A lot of the charm of the premise is lost by the third season repeating the first two seasons, the decline is kind of explained by the writer of the show changing every season, even though the show is based on a book series.
review updated: June 9, 2020